The showstopper of the afternoon Sports activities is the Men and Womens' Tug o' War contest. This is a keenly fought battle with little mercy shown by either team.  Judging by the numbers on each side, it's usually the Women that pull the Blokes!!! (Now THERE'S a switch!!) 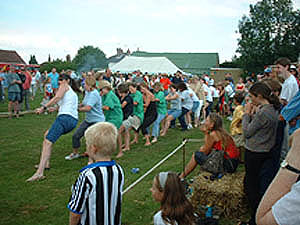 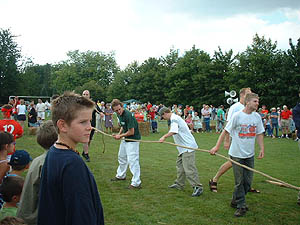 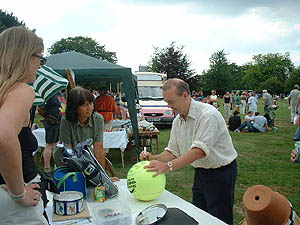 "Me and Ranulph were about here when the bloody engine on the snowmobile  froze!"

Seriously though, a visit to the Fete is a must for residents and visitors alike. One of the best around the County - so we're told (by a Fete Committee member who wishes to remain anonymous. - that's a tenner you owe us!!)

This year, by “Royal Decree”, and to celebrate 40 years of National Trust involvement in Sissinghurst Castle Gardens, the village annual bash was held in the Castle grounds. After months of detailed planning, and a complete disregard for the Law According to Murphy, the Fete went ahead as scheduled. As this year’s celebratory epic was to take place away from the usual Jubilee Field location, a bus service was planned to ferry the villagers back and forth to the site at regular half hour intervals. It was at that point, that good old Murphy and his theories were put into practice!

Access to the Castle is little more than a single track road, so if you add a few hundred cars and a large bus to the mix at the same instant - home time on the M25 repeats itself!

“Her Ladyship” and friend, trying to get their cakes to the Tea Tent, got fed up waiting in the car about a mile from their destination, and walked the rest of the way. According to rumour, they could have sold them ten times over to the waiting queues, before they even got there. This could have been a blessing in disguise, due to initial problems encountered with the “local power supply.” We’re given to understand that “Our Urse”, the refreshments organiser, was seen to be blowing  more fuses than the generators!

However, us mere mortals, having long since given up waiting for the bus, (which, unsurprisingly, rarely turned up because it couldn’t get to the Castle to turn round and come back again.), and determined to get to Terry’s Bottle Stall, decided to walk the route, thus placing all and sundry in severe danger of either being “wing-mirrored” from passing vehicles or given free tattoos by the side of the road from the nettles and the blackberry bushes. (Even they were sour!). We even missed the Grand Opening by Adam Nicholson & Sarah Raven. (Well known TV Gardening presenter - so the wife tells me!)

Still, once everyone had made their way to the grounds, all was sweetness and light. Everything worked;  the sun was shining and the cash was flowing. - just what you’d expect from a Village do - Dog Shows (in AND out of the enclosure), Family Sports Races, Tug o’ War (as usual the Ladies won!), Coconut Shy (with or without Araldite), Rat Whacking and China Smashing, Mr. Martin’s Wheel of Misfortune (keep on  turning), and Terry still trying to turn Water into Wine (as long as you pay!).  And all this to the sounds of the East Peckham Silver Band. (Wot  no locals?)

Unfortunately, due to the unexpected number of visitors attending the Fete, over 3500 by all accounts, (did someone omit to count the tourists already in the Castle grounds?), things started to run out... By mid afternoon, there was only “Bangers - minus - Buns” available from the  Barbecue. The Bun Penny Club looked like they were reduced to giving away packets of fresh air for prizes on their Tombola stall.  The Pub Barbecue team sold out in record time. Even the Pub Landlord was seen to be changing more barrels than pulling pints. (Clearly evidence of success rather than failure!)

But, all credit goes to folks like our very own Village Rep, “Citizen” Smith, tirelessly spending hours presiding over a hot Barbie, the Ladies in the refreshment tent attending to a never-ending queue of thirsty patrons, all the stallholders, the Bloke-on-the-Voice in the Sports enclosure,(Bet he went home with a sore throat!) and even the Guy in the Ice Cream Van. Thanks also go to the unsung heroes behind the scenes who managed to put it all together in the first place. (another tenner?) 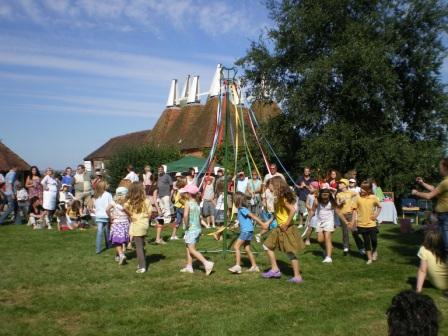 Maypole dancing in August? Why Not! 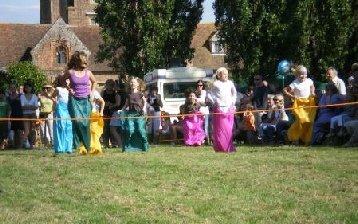 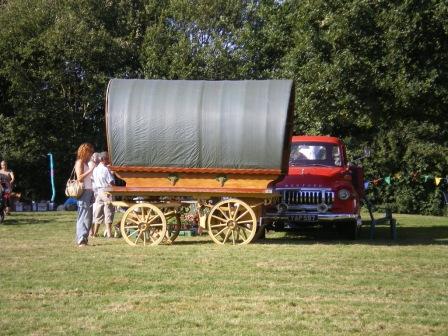 Those  darn Travellers will park anywhere! 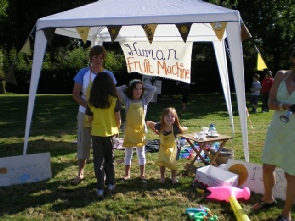 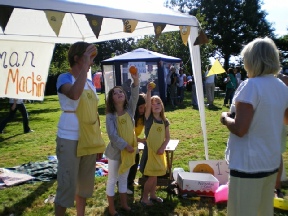 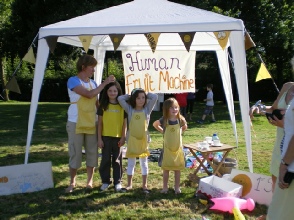 Very Clever!  How do you get the NUDGE to work? 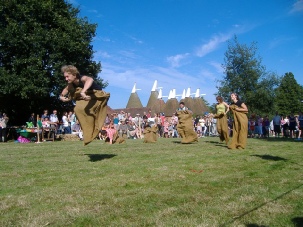 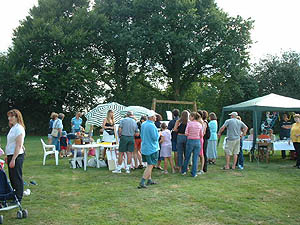 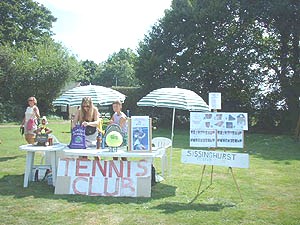 Stallholders enjoying  the afternoon sunshine - particularly when reflected off coins!!

The kids can also get their "kicks" on the model Steam Train. This is a thrill-a-minute,  fifty yard ride of pure high speed white-knuckle action. There and Back at Mach 2 - Definitely not for the faint hearted!! 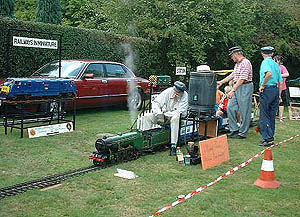 Music for the afternoon is provided by a lively group of musicians with a mixture of Rock and Easy Listening. The PA system is also provided by a lively bunch, although synchronism between the two is not often achieved..........  (and true to form on village occasions such as this, the system is almost guaranteed to fall over just when your winning ticket number in the raffle is about to be called out !!) 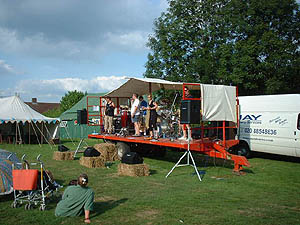 For those stricken by hunger and thirst during the afternoon's activities, the "Beer Tent" is annually operated by  the local primary school PTA. Nicknamed by some as  "The Highwaymen", (origin unknown, but in no way connected with the beer prices....) their sterling efforts have always been a credit to the show. 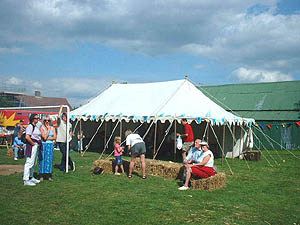 If you really need to cool down, you can always join the three mile queue at the Ice Cream Wagon.... 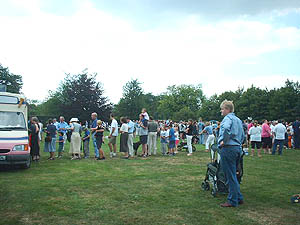 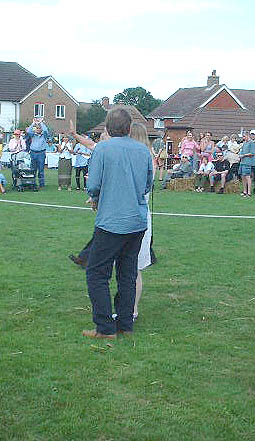 However, once the proceedings get under way, the entertainment is absolutely one-off! (you wouldn't find it anywhere else.). There's illegal gambling on Mr. Martin's Wheel of Fortune - we've seen the magnets!! 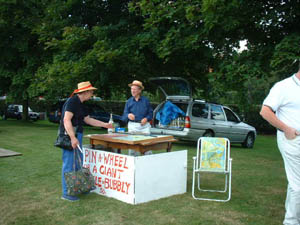 Mr. M. looks worried whilst a representative from Trading Standards checks his equipment.

Plenty of "hot" stuff is available on the bric-a-brac stalls. Look out for some familiar silverware... The Bouncy Castle is always fun for the children, although, if time permits, an adult session  may be permitted afterwards,  as long as you bring your own Baby Oil(??)

This is it people - the highlight of the annual village calendar, the one where everyone has worked their ***** off for the last twelve months (or was it twelve days??) to bring you the best that Sissinghurst has to offer (AND at two quid a pint!!) - The  Village Fete!! Held each August Bank Holiday on the only bit of public grass that hasn't been sold off for development, the event has always been a roaring success and attended by hundreds of visitors from as far afield as Wilsley Pound, Chapel Lane and the House Next Door!! Even people from Cranbrook have been admitted, AND without having to show proof of age. Yes!!

The official opening is always held at 2.00pm sharp by a well known village celebrity, although it is strongly rumoured that the Guest of Honour's punctuality may be occasionally affected by local time zone differences....

(or FAIR depending on where you're from..)