By the Village Idiot

(As there are more sites around the globe covering Sissinghurst Castle than we've had toast for breakfast, this one DOESN'T!. However, if you really, really need some info on it, please click on the picture.. And unless the National Trust has moved it (again!) it should take you right there. 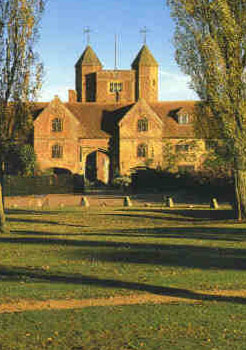 The Friendly Castle Ghost (or is it the bloke who takes your money in the car park??)

What can one say about the Village?  - The "Lakeside" of the South, the "Bluewater" of Kent? After all, there is a lake of sorts nearby, not forgetting the pond behind the Pub. As for  "bluewater", if you stand in the right place on a clear day, you might just see  the sky in it, or more likely, your own reflection after a good lunch at the bar....

Yes, Sissinghurst is truly a Shopper's Paradise, not so much for the shopper but for the partner with the wallet . (This is mainly because there aren't many and will therefore save  a fortune.). There's nightlife, entertainment, clubs, restaurants, bar(s), the whole shooting match!! So without further ado and starting from the top, let's take a trip down The High Street (sorry, The Street!).

Click on the Thumbnails below for the bigger picture..

This is it, the "Hub of the Empire", no village worth it's salt should be without one.  Trinity Church - first opened its doors in 1838 to bring enlightenment to the masses, (Electricity was not installed until many years later!) Still packin' 'em in on Sundays, the "Management Team" continue to create, support and maintain worthy  and charitable causes. They'll even Baptise you, Marry  and Bury you, though not necessarily in that order. (To avoid problems with administration, please do not ask for all three on the same day.)  Everyone, however, is welcome to come in and chat with The Boss. See the Notice Board for opening times.

Better still, why don't you check out their very own website right here :-

...And right next door we have what was the old Primary School - Sissinghurst C.E.P. The school has an excellent reputation and judging by the number of cars  that used to be seen parked in the Playground, the Teacher/Pupil ratio must have been getting smaller by the minute. (Or has the driving age been lowered??) Having been around for years, it had a warm place in the hearts of many - those young enough to be threatened with having to start there in the new school term, and those too old to remember they were there in the first place. Ideally situated midway between the Church and the Pub, it clearly provided a unique educational start down the road of life.( What happens when you reach the crossroads is entirely up to you!! )

Sadly for some, the school has now moved to new premises on Common Road. Noticeably, the traffic congestion problem hasn’t moved with it!  It has in fact  effectively doubled especially when School events take place. Common Road becomes a single lane highway!. Look out when you come round the bend….. And now that the housing development behind the old school has almost been completed, look out for even more congestion,

...And talking of crossroads, (more of a T-Junction really), there's the Pub. Originally known as "The Bull" , due to the quality and quantity of conversation generally heard around the bar most weekends, it probably laid claim to being the only pub in Sissinghurst. Or to put it another way, Sissinghurst is arguably the only village in Kent with ONE pub...and at the current rate of progress, only ONE Hop Field!!  Even that’s gone now. The other village watering-hole was the Camden Arms which sadly burnt itself to the ground in 1995 in favour of residential cottages....Cheers all!

In September 2011, The Bull finally closed its doors and was put up for sale. It was not until sometime in 2013 that it eventually re-opened under its new name “The Milkhouse” - arguably a misspelling of the old name for the Village (with a “Y”) - but as we all left school years ago, no one is going to nit-pick the new owners on that one!

Rather than blither on endlessly about the facilities and the menus, you can judge for yourself on their own website. www.themilkhouse.co.uk

Generally speaking, it’s a nice pub, good décor inside and out (if you like “shabby chic”) good food, possibly not enough variety on the menu and definitely a bit OTT at lunchtime if you only want a pint and a sandwich. Since the landlords have taken up residence, there are plenty of activities on offer especially at weekends and Public Holidays - enjoyed by all except perhaps some residents along The Street and the problems with car parking……

Right across the street from the Pub was a sort of Garage. (Original photograph remains in the interests of historical research - though why anyone would want to research old Gas Stations is beyond us!)

However, for some time now, the site has been redeveloped into a row of small terraced houses and we have to say that the design has blended in very well with the rest of the village buildings.

First off the blocks is one of the many eating establishments. Serving "local" fare, The "Tanned Doory" opened for business in the late twentieth century. There seems to be some controversy surrounding the term "local" in this instance, although the village of Sissinghurst may have, at some point in its history, been twinned with the  Town of Upper New Delhi. Nevertheless, we can confirm that the proverbial "scran" on offer, is definitely "good"!. Unfortunately we have no idea what a Doory is...

Historical Note : The premises were originally used for a Chip Shop and at the time, there were strong rumours that the oil used for frying was somehow piped in from what used to be the garage next door....quite.

If Trinity  Church is the "Hub of the Empire", then this place has got to be the Engine Room ! Apart from its normal function as General Store and Post Office, Mace, as it used to be known (it's name was inherited from the tale of  the original owner who regularly used one to subdue unruly customers who complained about their newspaper deliveries.) served as the village Voicemail  Network and was, and still is, rumoured to be the Nerve Centre of the mysterious Bun Penny Club. It was definitely NOT known as "Hempsted's Hypermarket".  The shop was eventually put up for sale in 2011 about the same time the pub closed, and came under the new management of one Ian Florey for a time. Ian  moved on to further alcoholic fields in Tenterden and the shop was effectively left to its own devices. All thanks to the shop girls and boys left to keep it afloat.

.It was finally taken over by some business owners from TW  in 2013 who now have it completely restocked and under the new name of “TN17 Wine and Food.” (Orginal what?)

Look out for the ambidextrous Kate, with one hand working the Post Office and the other the Checkout till - hilarious. 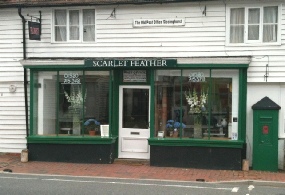 However, still hungry, then back across the road is the next food establishment, Rankins Restaurant. More local fare but this time featuring in Someone-or-Other's Good Food Guide. Highly recommended. All the good people eat here - you can tell that by the cross over the door..(actually, it's the end-on view of the restaurant sign - who says the camera doesn't lie!), Not always open but does a good line in outside catering. (We’ve had some!). See their website for more info:

Sadly you wont see this shop front again. Not so much DIY more a case of DIFY. (Do It For You.). This quaint looking emporium was choc full of carpets, curtains,  materials and any other goodies you needed  to upgrade your pile. They'd supply 'em, make 'em and fit 'em! All YOU had to do was Pay 'em!! Clearly a thriving business as unlike others in the street, this place seemed to have been around since Adam was a lad!

Like so many local businesses, the owners have now sold up and moved to France. (Migration in reverse?)

A little further down the street you'll find the "Town Hall". Better known to the local population as "St,Georges Institute", there is absolutely no truth in the rumour that the building is full of Old Dragons!

Built during the Napoleonic Wars, this was the first structure to use corrugated sheet metal as roofing material and was one of the first Anderson Air Raid Shelters to be employed during the conflict. It was eventually decommissioned following an annual meeting of the village elders when it was quietly pointed out that aircraft had not yet been invented.

Almost a listed building, it is known and loved by the whole community who don't really care which way it lists as long as it stays standing. Long may it survive. More tea vicar??

Not one of it's best sides, but  it's had its uses, as every good junior football player will tell you...

There were plans afoot to relocate  "St.Georges" to another more salubrious site. It was quite conceivably to be this one :-

That WOULD have pleased the Cricket Club...!

With the opening of the new school and the relocation of the Kindergarten to a permanent home therein, the “Old Green Shed” needs some new customers. Without an increase in income, its future was looking very uncertain. However,  work was scheduled to start  in 2014 to re-furbish and extend the old place to be able to better serve the needs of the community, It is now 2016 and she’s still looking the same. So much for schedules. It also now has its’ own website , which no doubt will keep us up to date.

There is one other establishment worthy of mention and that is the "KIngs Head". Whilst this looks an extremely inviting and alternative proposition to The Milkhouse  above, tipplers are warned not to enter the premises at opening times for the following reasons.

1. There ARE no opening times

(An interesting bit of info  we have come across regarding the Pub - a reader's great Uncle Charlie and his wife Doll were publicans here during the War. Apparently he got the push for illegal dealings in the black market -   (which, as everyone knows, was eventually replaced by the Co-Op!!) We gather he then went on to look after the local female talent digging up vegetables - Land Girls??  thanks for that Chris!!)

WELL that's about the end of the road more or less, and since the Whole is the Sum of its Parts, put them all together and there you have it ----- 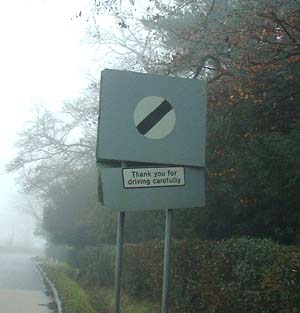 Shame.  Somebody didn't .......!! Probably explains why the sign was replaced by an electronic 30mph warning sign, of which few people seem to take any notice…. 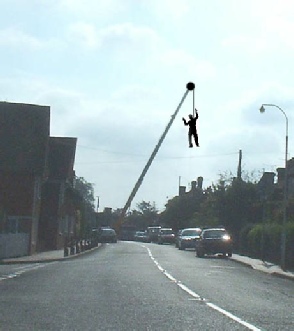 Captured on film recently - Sissinghurst's answer to the problem of village vandalism.