Over six thousand cheering visitors and residents of Sissinghurst, in Kent, gave the Tour De France race riders a screaming welcome when the race whizzed through the village on its way to Canterbury.

From 10 am in the morning visitors poured into Sissinghurst parking in the specially provided car parks and made their way to the Jubilee Field, to enjoy not only the specially launched Wine and Food Festival, organised by Ian Florey, but also to take part in a host of other entertainment.

The celebrations in Sissinghurst were not only fund raisers for Sissinghurst local organisations including the Bun Penny Club, Darby & Joan, Cubs and Scouts and the football club but also for the Kent Air Ambulance, that during the day made a special visit to the Jubilee Field - albeit from 1000 feet !

Cheering behind the safety barriers on all of the route through Sissinghurst, riders and their support vehicles certainly appreciated the tremendous welcome they received from the huge crowd. When race riders had gone, and if you blinked you missed them, the very happy crowd returned to the Jubilee Field for more celebrations and to enjoy the attractions specially provided to make the Fun Day a great success - as it was.

John Bancroft Chairman of the Organising Committee said "Our aim was to provide to the local community, residents and visitors with a day of entertainment I think that we did that - and we have been very touched by the many notes and messages of congratulations."

On Saturday evening, the Sissinghurst Primary School held a Barn Dance in the huge marquee on the Jubilee Field and in aid of the Kent Air Ambulance £205 was raised at an auction for a mountain bike kindly supplied by Ian Florey, the owner of the Sissinghurst Village Shop.

Sissinghurst Village organisations will all benefit financially from the Tour De France weekend of celebrations. Once all overheads have been paid the balance will be shared with organisations, clubs and groups based in Sissinghurst. The weekend was also focused to raise much needed funds for the Kent Air Ambulance who will also receive a major donation.

Throughout the Tour De France race route in Kent, South East In Bloom judges visited all of the race route villages and towns to see how the race was not only being celebrated but also to see what effort had been put into decorating the route. Having made those visits and having looked at photographs South East In Bloom awarded Sissinghurst with a GOLD AWARD - Dennis Hemsted one of the Sissinghurst Tour De France Organising Committee members said "The Judges were very impressed with the effort that Sissinghurst had made and were particularly impressed with our Penny Farthing Bicycle display of the roundabout at Wilsley Pound. We will be presented with a certificate by the judges."

WHAT CAN WE DO WITH THE PENNY FARTHING !

Sissinghurst is now the proud owner of the huge Penny Farthing bicycle that stood very proudly on the Wilsley Pound Roundabout in the build to the Tour De France Race. We now need to find a permanent home for it - it's ideas we want!

If you have any positive ideas about where the Penny Farthing, made locally by Robert Longley, can be permanently placed please do not hesitate to contact Dennis Hemsted.

One idea is to place it close to the Sissinghurst Village sign on the Jubilee Field. It can't be returned or kept at the Wilsey Pound Roundabout because of the very costly premium public liability insurance cover imposed by Kent County Council.

More photos of this Biggest-Village-Occasion-Since-Old-Bill-Fell-Off-His-Bike, Can be found in the GALLERY . Ride ‘em Cowboy! 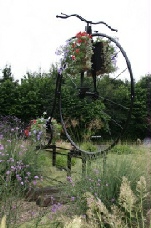 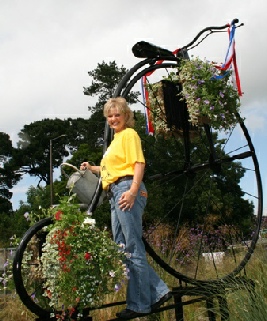 The “Penny Farthing” on the busy Roundabout at Wilsley Pound.........

(How DID she get off there without being knocked into the middle of next week??!!)

Hidden behind a “300 foot hedge”, just along the road from the old “Kings Head”, the only indication of something more than a gap in the fence, was a rickety old white painted gate with the name “COL’S GAFF” or something similar on it. If you ever stopped long enough to try and see what was behind it, you were likely to have your collar felt by the long(ish) arm of the Part-time Law and accused of peeping tommery. However, all that has now changed since the local tree surgeons have moved in and chopped the lot, and the secret is now out! “What’s all that there ‘ere then?!”-  from “the Lady-in-the-Green-Uniform.” Blimey, it’s another house! Did it have planning permission? How long has it been there? Research has shown the place has probably been around long before Denis Hempsted was a gleam in his mother’s eye, and even before the Hawkhurst Gang opened an office next to the Pub. (Either way it’s old!).

So before the builders have done their bit to update it, thought a couple of pics would be the order of the day for posterity:- 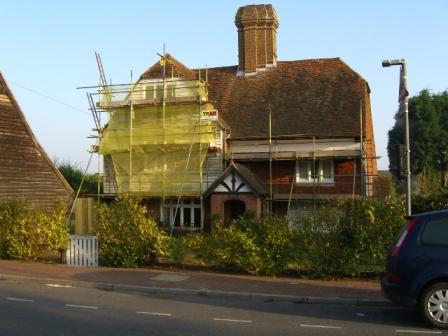 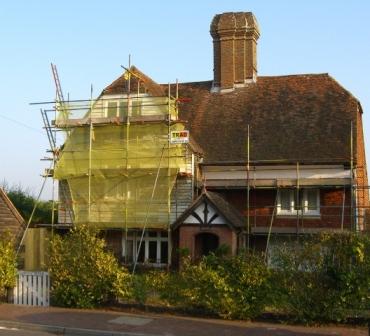 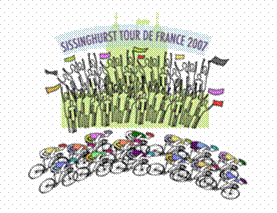 “The Biscuit” in this instance refers to the prestigious “Kent Community Retailer of the Year 2008” Award, which was won by our very own Mr. Ian Florey of the SPAR shop in Sissinghurst. Ably assisted by Joyce and the Gang-of-Many, the whole team have unfailingly bust their proverbials  to keep the shop afloat throughout the year in the face of  such adversity as school runs, (The Primary School and the “Chapel Lane Chokers”)  temporary traffic lights,  double parking, “Meldrews” by the shed load and the odd Johnny Foreigner trying to find his way to London after the M20  has closed for the third time in a week.

Suffice to say, they have all given us a local shop the like of which we haven’t seen since “Our Denis” rode off into the sunset! (Actually he only disappeared round the back of the place, but it sounds more dramatic).

Unfortunately, there have been scurrilous suggestions that there could be another reason attributed to this achievement since we note that the annual competition is organised by the KARR , who may not be who they say they are,  but instead  - Known Associates of Reggie and Ronnie!   Perish the thought!

Joking aside , you’ve all done wonders with the joint - Keep up the good work! 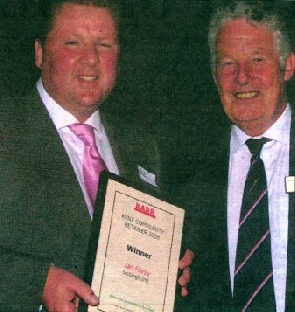 This is the only photo we could find of Ian accepting the award, as he normally refuses to be pictured in his “shop uniform” until M & S start advertising their Summer Sales. If you don’t know who Ian is by now, he’s NOT the bloke on the right!

(Photo with acknowledgements to KoS) 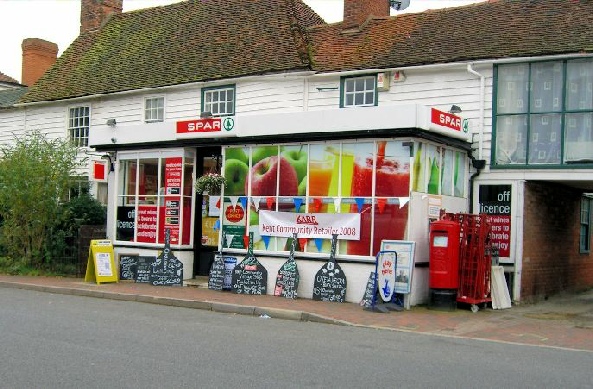 The Village Shop proudly displays the award banner - at least until the local vandals have other ideas. Bless ‘em!

PUTS THE “FRIGHTENERS” ON!

If you looked in on the local Place of Worship on the 25th September 2010,  and indeed for the rest of that week, you could be forgiven for thinking that what was left of the congregation had shuffled off their mortal coils  long ago, and failed to vacate the premises - Dead bodies all over the place!

However, if you had seen the notice on the wall outside, you would have realised it was all down to an innovative “Scarecrow Festival”, (in conjunction with the annual  Church Harvest Festival) and organised by the Friends of Sissinghurst Church , in their ongoing fund-raising mission to keep the place upright. The “Dead Bodies” littering the church pews and entrances were in fact local made Scarecrows put together by many of the village children and organisations.

Clearly much time and effort was spent on their designs and build as some of them looked quite lifelike, especially D.I. Dick and the the Caledonian Clergyman. Whilst the festival is on, preaching to the congregation should be a doddle with this lot in attendance - the silence will be deafening!

Exactly how “scary “these figures are meant  to be, is difficult to determine . What they were meant to scare was also unclear, since observations at the time indicated there wasn’t one old crow to be seen in the place.  Oooh Aaaarh!

Hopefully we’ve managed to capture all the “suspects” before they end up on the garden bonfire, or at the back of the shed  as a home for the local wildlife. 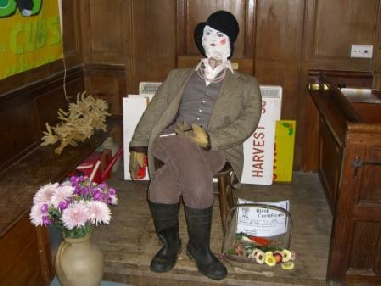 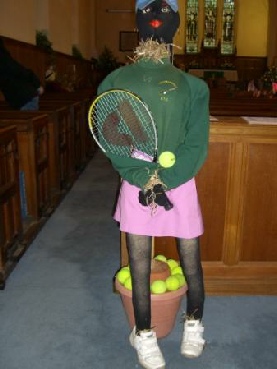 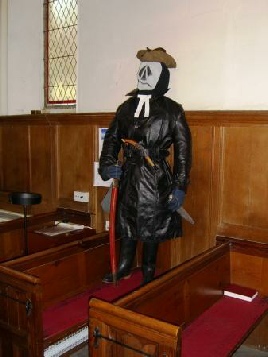 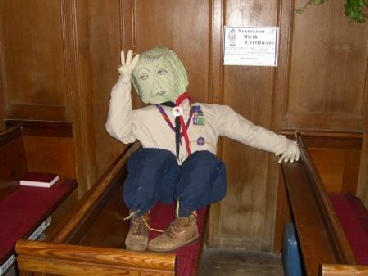 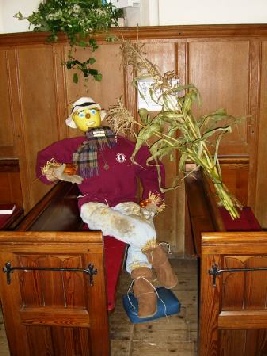 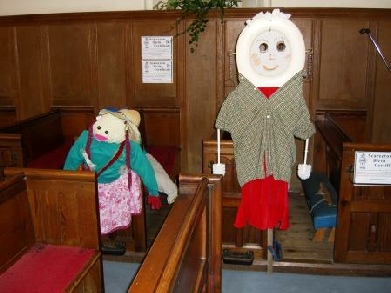 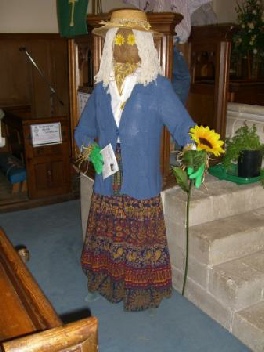 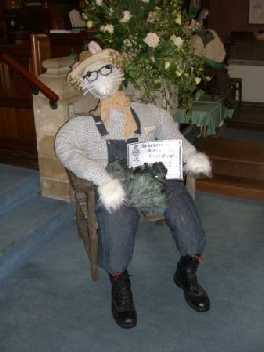 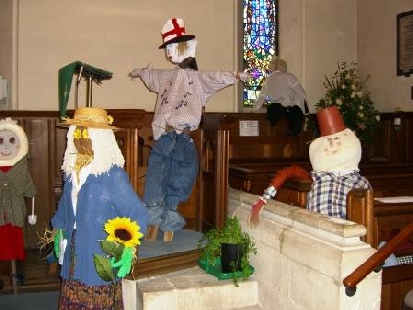 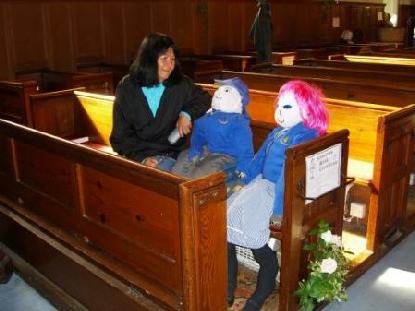 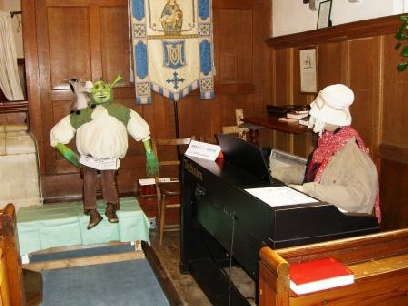 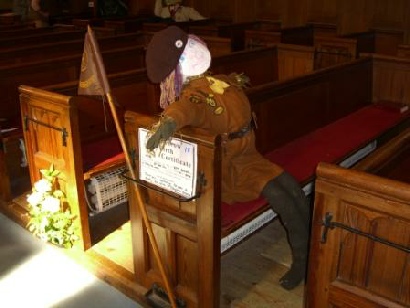 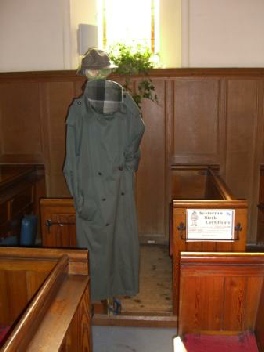 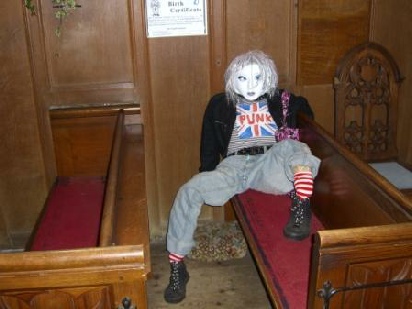 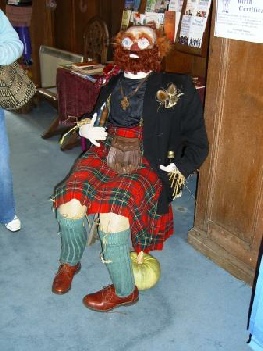 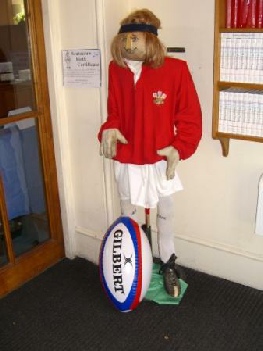 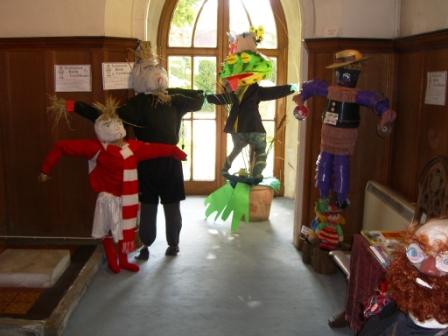 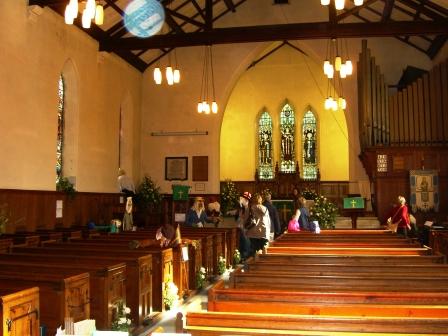 to everyone who took part!