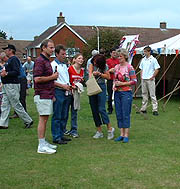 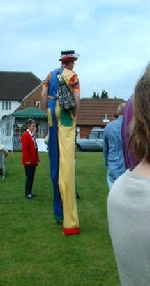 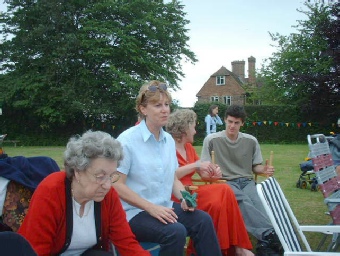 Greg shows his Mum how to work an ejector seat, while

Jen's Mum is about to eject from hers!! 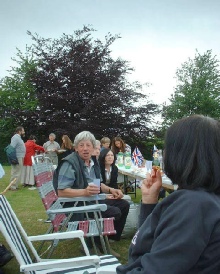 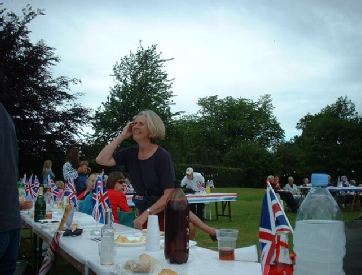 ..fifteen minutes after everyone else!!! 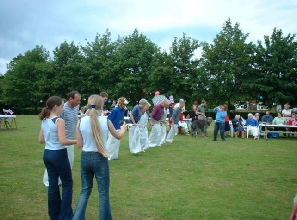 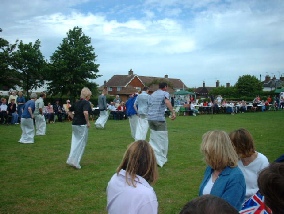 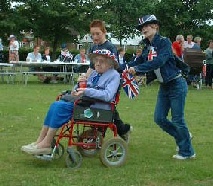 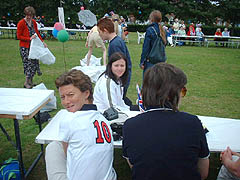 How much for this patriotic bottle of Coke?

...And a very big "thank you" goes to all those involved for their excellent efforts in turning a near non-starter into a brilliant finish. For those of us unlikely to be around for the next 50-year Celebration, we'll have one when we're Up There, or a couple more Down There to put the fire out so to speak..., 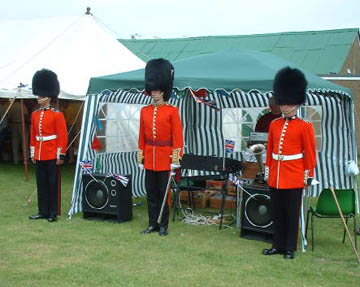 Up and down the country, towns and villages of all shapes and sizes, were celebrating the Golden Jubilee of that venerable lady of the people, Mrs. E. Windsor a.k.a. "The Queen". Her 50 years in the "hot seat" were recognised with various street parties, parades and fairs nationwide. Not being one to miss out on a nice little earner (The Bull amongst them..), Sissinghurst Village also got in on the act and decided on a street party. Unfortunately, "The Street" in Sissinghurst  forms part of a major route to the Channel Ports and to actually stage the party along it, would have exposed the entire population of the village to the risk of being squashed by those nasty window-rattling foreign trucks that regularly drive through on their way home to the Continent.

"Mais ce n'est pas Our Queen, mon old ami - Je suis comin' through ici regardless!!" -  a typical view expressed by some of the drivers., although only one was prepared to give his name - J.Forriner , we believe.

Instead, the party moved to the Playing Field (Jubilee Field to give it its proper title - very apt!!). With more bunting than a used-car lot hanging over fences and houses, the whole place looked the part. We gather that most, if not all, of the flags were locally made, including the ones seen in the front garden of a house in Hop Pocket Close. (If you happen to be missing a few pairs of red polka-dot panties, we think we know what happened to them...!!)

Here then, is a pictorial souvenir of  Fifty Years of E II R - Sissinghurst style....