THE HISTORY OF THE VILLAGE OF

(*...although how  you derive "Sissinghurst" from "Mylkhouse" beats us, but that's history for you.)

In fact, "Milkhouse Street" which presumably was the main road through the village, was renamed Sissinghurst sometime during the 1850's. According to records, such was the nefarious reputation of the village that a name change was deemed necessary, probably to avoid blacklisting from the Cranbrook Tourist Information Office!! What on earth were the residents of Milkhouse Street doing in those days to warrant such drastic action - Interfering with the bovine population on a Sunday? Selling milk without a license, or worse, sneaking the stuff in from Calais to avoid VAT? Such activities at the time were quoted as being "smuggling, cockfighting, outrage and robbery by rogues who infested every corner of the road" - so nothing new there then, and there ain't  many corners through the middle of THIS village!

HOWEVER,  the Entirely Unofficial Potted History of the village

Around 1300BC some ancient working tools were discovered in the area, giving rise to the possibility of the existence of an early Homebase/B & Q DIY Superstore and some years later (843AD) the Archbishop of Canterbury, capitalising on this discovery, bought up the entire county with a view to filling the church coffers from property development..…

One assumes it was his task to ensure that all the banking whizzos at the time were herded off to Staplehurst Railway Station each working day, in one of Farmer Arriva's Bullock Carts  to catch the 7.30am train to the City. Those fortunate enough to be given  Company Horses, were permitted to stable them in the Station Paddock whilst the   wives were left to freely clog up the muddy tracks in and around the village in their bright shiny four-wheeled drive Carriages.  No doubt the occasional "slacker" was dealt the ultimate punishment of having to buy a round of drinks at the Local every Friday night for the next three months!  (Ten Sovereigns a pint, we are led to believe!!)

However, this was all well and good until  about 1760 when the Manor was renamed Sissinghurst Castle by a handful of French prisoners of war who, whilst attempting to escape forced gardening duties on a Public Holiday, mistakenly thought they were in Colditz.

nb. It really DOES have a nice garden - ask The National Trust!!)

In 1838, the A of C suddenly  realised  what a bunch of heathens lived in the village and decided to establish a church for the not inconsiderable sum of £1900. Shortly after that, when it was discovered that half  his  local ecclesiastical staff couldn't read the names on their payslips, he managed to sting the KEC for the princely sum of £350 to build a school. That worked out at about a quid a pupil which was pretty cheap by anyone's budget!! No wonder they all went to Dulwich!!

The only real claim to fame as far as the village is concerned was the purchase, some years ago, of Sissinghurst Castle by the late Vita Sackville - West, accredited by some to be one of the leading  Writers of the thirties, and, more recently,  the late  retired Archbishop of Canterbury,  Rev. Donald Coggan  who used to live up the road from the Pub. Nice one Don !!

There was also THE GREAT HURRICANE of 1987 which caused widespread damage to large parts of South East England and the resulting blocked roads brought the village to a virtual standstill - much like the daily occurrence outside the  Primary School around 8.40 every morning.......

Aside from that,  somebody's old Oak Tree fell over recently, clearly demonstrating  that what goes up generally comes down eventually.  But at last, albeit a few hundred years late, we  have our very own Village Sign which  apart from an old bike parked up against it , has remained upright and vandal-free to this day.

An excellent achievement  and congratulations to all involved , even our Terry who cuts the grass round it!

..And finally, it has been said that should the Ravens leave the Tower of London, then the City will collapse (or something like that.) - So for someone who seems to have been around for at least that long, here's to good old Bill G. - Don't you ever go away!!

Sadly , Bill passed away on 5th January 2007. He'll be remembered by many and forgotten by none. 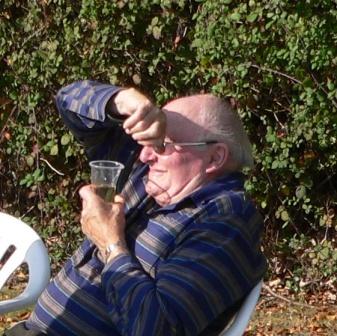 “Old Bill “- Doing what he loved : Watching both Tennis and the Level of his Glass!