Sissinghurst Village boasts many varied Groups and Organizations  ranging from the simple street corner  "Chat Rooms," whose primary function is to perform the weekly ritual of "Putting the World and a Few of its Neighbours to Rights", to the more sophisticated  up-market  crew which comprises the Flower Show Society. As the majority of the members are only “Fair Weather Gossipers”, you will

Generally only see the Chat Roomers during summer months, especially near bus stops.

Due to the stringent requirements laid down in their operating charters,  gaining membership to any of the "Chat Rooms"  is extremely difficult .Minimum length of residence in the village is set at one hundred years. Immediately following a Major Village Incident, like the Milkman being half an hour late, a member must be prepared to stand in the street  in temperatures of minus ten degrees for a period of not less than three hours and recite a complete verbal account of the problem to a group of at least  three individuals, wearing nothing more than a pair of slippers and a vest..

Waving to a passing vehicle is obligatory, and must be followed by at least a fifteen minute talk on the life history of its driver. 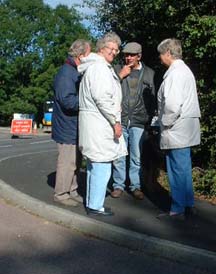 " Rare snap of a local chapter of the "Chatroom" taken just after the mysterious appearance of another temporary traffic light!! "

On the other hand, membership of the Flower Show Society is a much less complicated affair. If you  can stick something in a pot, water it and get it to grow without attracting  too much attention from the local authorities,  then you're in!!

Rumours abound of many clandestine and totally illegal organizations in existence, but since the WWW is about as private as a clear-glass  shower in a car park,  we will confine this guide to the more traditional Groups.

For the Cream of the Crop (watch the spelling!!) click on some of the more prominent regular gatherings listed under Clubs & Societies.